You are here: Home / History

1943
During the post-war period, the population of Ann Arbor drastically increased along with the number of Catholic families. St. Thomas Parish grew to a point that it was, “impossible for the clergy to know all the people” and “the school was filled to capacity. ”

1954
Despite the start of St. Andrew Catholic mission parish in Saline in 1953, the number of St. Francis families doubled in less than four years. A December Parish census taken by seminarians recorded 501 registered families at St. Francis.

1959
Father Frank Peter Srebernak is appointed St. Francis’ 2nd pastor. Father Kennedy is appointed pastor of St. Michael Church in Pontiac. The Parish, near the end of its first decade, has 718 registered families.

1963
St. Francis hosts the local Conference on Religion and Race, sponsored by the Washtenaw Deanery of the Catholic Archdiocese of Detroit, the Ann Arbor Washtenaw Council of Churches and the Beth Israel Jewish Congregation, establishing a precedent and framework for further interfaith cooperation.

1967
A Synod, Seeking Progress Together, is held. Participants met in homes to watch Archbishop Dearden on television speak on matters, “affecting the contemporary church. As a result of the Synod, St Francis’ first parish council begins July of 1969. It is to be a decision-making body, sharing responsibility with the pastor for parish administration, in both spiritual and temporal affairs.

1969
Ground is broken in spring 1968 and the Church was blessed on March 29, 1969 with the permanent church designed by architect James P. Wong. The first Mass was celebrated in March and the church was dedicated December 8. With parish donations, and funds from the George Liptow estate, and bequests from Kathryn and Cornelius Tuomy, the building was paid off in 1973. With no pews more than 80 feet from the altar, the 1100 capacity church gave the feeling of closer participation in the Mass. The Parish has 1000 registered families.

1970
St. Francis hosts the entire Christian community of the Ann Arbor area in an Ecumenical Service of Catholic, Protestant and Orthodox congregations. The first ever held, Fr. Srebernak asked all “to show and to grow in our determination to live, work and pray, without ceasing, for that unity which is Christ’s will. ”

1971
The counties of Lenawee and Washtenaw are detached from the Detroit Archdiocese and become part of the Diocese of Lansing under the direction of Bishop Alexander M. Zaleski.

1998
First Parish Mission, I Have Called You by Name, is held to help parishioners prepare for Lent. This special week is filled with services, liturgies and time for prayer and reflection. The Mission is an opportunity for Christian growth in a retreat-like environment – a time to relax, mediate and renew our spiritual energies. Held annually at first, the Parish Mission is held every other year alternating with our Common Conference.

2000
Under the guidance of Fr. Charlie, the Education Trust Fund drive raises $500,000 and the Trust is amended so that St. Francis School would be the sole beneficiary.

2001
Led by Fr. Jim and Educational Trust Fund Board, set a long term goal to increase the core fund, with proceeds from bequests, estate gifts and the new ETF annual benefit to over 1,000,000. The ETF currently provides an annual distribution to our School, funding its quality curriculum and highly educated and robust faculty and staff. St. Francis School is recognized as one of the leading Catholic schools in the Lansing Diocese.

2006
St. Francis holds it first Common Conference. This event, the first parish conference of its kind in the Lansing Diocese, is attended by approximately 300 parishioners and includes a keynote speaker and 30+ workshops on theology, spirituality and living of faith in our daily lives. Held annually at first, the Common Conference is held every other year alternating with our Parish Mission.

2014
Today, St. Francis Church is one of the largest parishes in the Lansing Diocese with 2800 registered families, numbering over 7000 parishioners offering 87 active ministries. Our Religious Education program serves 615 children preschool and kindergarten through eighth grade. Our school is home to over 440 students, preschool and kindergarten through eighth grade. We are lead by our new pastor Fr. James P. Conlon. 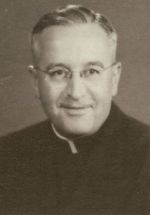 “I know of no words which can match the reality of his achievement, to put the church of God where before there was only emptiness. The flickering sanctuary lamp in St. Francis Church could tell many a tale of what this man has meant to the people of the parish, who cleared the hillside to build a home for our Lord Christ.”
– Fr. Maurice Greary
(Fr. Kennedy’s assistant, 1959) 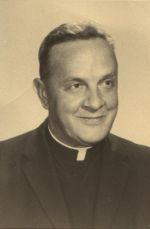 “Fr. Srebernak is a most remarkable, holy man. Although far more interested in the spiritual life and growth of his parishioners than in the physical development of the premises, our present church was built during this time here. His Masses were among the most reverent any of us will ever attend, with sermons brief, powerful, yet simple. Though not in the best of health, he still has piety, generosity, studiousness and wonderful sense of humor.”
– Mrs. Kay Kinney
(parishioner, written for St. Francis’ 50thanniversary, 2000) 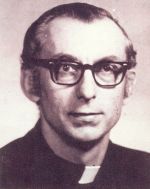 “Fr. Ray is a very religious man who was raised in the Fowler/Westphalia area. This area produced many dedicated priests and nuns. Fr. Ray saw that the parish was in need of a strong men’s organization. He started the Knight of Columbus Council 8989 and it has been a real blessing to the Parish and community. Thanks to Fr. Ray’s guidance in its formation, the St. Francis Knights have been honored not only locally but nationally. Thank you Fr. Ray, for your guidance in following our Catholic faith. “
– Mr. Tom Clark
(parishioner and former K of C state deputy, written for St. Francis’ 50thanniversary, 2000) 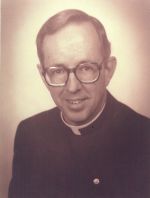 “This Ann Arbor man attended [the University of Michigan] University High School, Business School, graduated from the Law School and came to St. Francis as one of our own. He knows about the imperfections of man – his, yours, mine – and with humble spirituality undertook the task of helping us find our way to our Creator. He left us better than he found us. ”
– Mr. Marty Edwards
(parishioner and personal friend, written for St. Francis’ 50th anniversary, 2000) 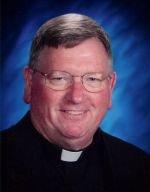 “Fr. Jim has understood the mandate of the Church for evangelization in the new millennium and has made it a part of his personal philosophy as a priest. Using his talent to look through the lens of Jesus Christ, his vision for the future is to create opportunities for all of the parishioners to live and express their faith in many and various ways. Thus allowing all to share in the mission of Jesus to spread the Gospel, glorify the Father and participate in salvation history. In a word, he is a pastor, a good shepherd. ”
– Fr. Jay Kersten
(Parochial Vicar 1998-2002, written for St. Francis’ 50th anniversary, 2000)